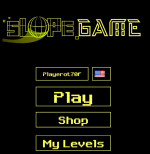 The Slope Game is an excellent example of a speed run video game in which the player controls a ball as it rolls across a variety of slopes and obstacles. You still haven't tried Slope, if you thought you had true gaming frustration under control.

Slope may not appear to have much gameplay, but as soon as you start playing, you will realize that it is a game you will spend hours playing. In Slope, there is no tutorial. According to a short notification that appears when the game is first launched, the only controls in Slope are the left and right arrows on the keyboard.

To play, press the arrow keys.